Exponents of the Cervantes and Quijotes Hall

Find out more about the Cervantes and Quijotes hall

Jose Marin-Medina
Extract from the foreword to the Alcantara Catalogue – Don Quijote
Quatercentenary of Quijote, City Council of Alcala de Henares
In Alcala-Madrid (Spain), end of 2004.
…..
This delicate and formidable statue of Don Quijote – performed at almost four times average size – is indeed a commitment, unregistered and unpredictable work, a transgressor output to represent a natural condition, a human frame of mind and some equally and profoundly transgressor thoughts which could only belong to the great writer.

This Don Quijote de la Mancha has a predictive, enlightened, and even avid aggressive nature; it resembles the most passionate Romanesque statues at first sight. We can appreciate echoes of Bernini and mannerist sculptors, perhaps due to the setting of its eyes – a significant issue here-, enlightened by the incorporation of a rod inside his pupils- with which he yields a deep sight- and, also enhancing the silhouettes to make them spectacular. Yet, the author highlights the skull’s contemporaneity when we merely take note of the pattern that Alcantara has given to the shell- compartmentalized in rhomboid shape. Thus, this artwork gains an avant-garde and gallant mood, the mood in-between Picasso and cubism. Likewise, the pedestal or enhancement of the statue has an upwardly rhomboid shape. Nonetheless, if we take note of the ties between the shield and the neck and the synthetic nature of “abstraction” of the structure, the awe of the author for the Florentine manners dawns on us; and, if we consider the striking shape of the output, we must refer to our records of the Baroque.

In my opinion, for all these reasons, such an uncommon and unique outline of this Quijotesque shield points to the geometrical and ardent inter-weaving of the tough sackcloth which covers the body of Penitent Mary Magdalene by Pedro de Mena guarded in the National Sculpture Museum of Valladolid. Besides, this brightened head of the Hidalgo of La Mancha reminds me of another sculpture full of hints to Grenada’s Spanish baroque sculptures: I am pointing out to the mythical skull of St Francis of the cathedral of Toledo. Mena accomplished this artwork with a strong dramatic impact following the model which Alonso Cano – his preceptor – made of the Saint of Assisi following the traces of the mummy “as it was found when the sepulchre was exposed, as stated in Grenada in several paintings”- as Mª Elena Gómez-Moreno mentioned.

This mix of long sculptural memory – from international Romanesque to the Italian mannerism and the Spanish Baroque to the formal and conceptual
development of Picasso in his cubist period – is not free from the crude forms’ aesthetics that characterizes the formidable sculpture of the black ethnicity. For a good reason, two African sculptures dating back to the 19th century represent maternity and a “paternity” respectively chair the raised room of the apartment that Andres F. Alcantara owns in Alcala de Henares. From my perspective, our sculptor has learned from these to equate the shape and the mystique analysis. Concerning a sculpture which revolves around an unpretentious portraying of the conditions of nature – going back to the portrait of Don Quijote by Alcantara – it is worthwhile considering how the large, tightened ears of the astute hidalgo are handed as separated sculptures, filled with organizational sense, human artistry, and unfounded motions.

In a nutshell, Alcantara has placed a sort of bizarre basin- the same which the Knight of the sorrowful silhouette muddled with the Helmet of Mambrino – whose ribbing, in my opinion, make it look more like the dome of the cathedral of Florence – or even the rods of an open sunshade – than the conventional vase with a cut-out in which the barber used to water the beards of their customers. This most unusual basin infuses a powerfully imaginative, even irrational feature – surreal? – in this skull carved in marbles splendid like gems: red from Alicante for the crown – which brings a fleshy nuance – and cherry red for the pedestal, which is nothing other than marble Sarracolín, also known as marble from Extremadura.
……
(Adapted by JMS) 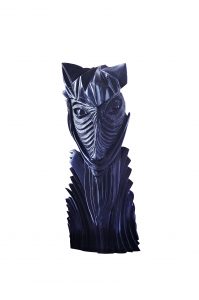 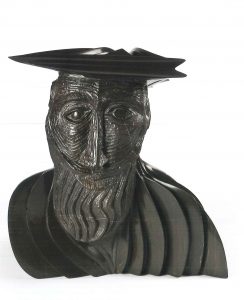 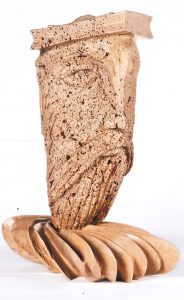 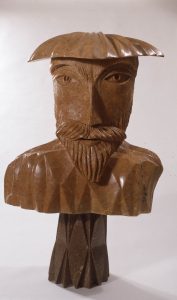 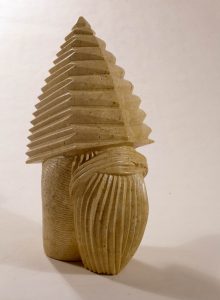 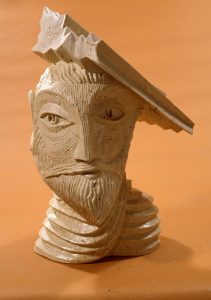 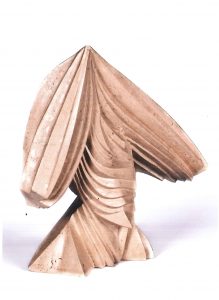